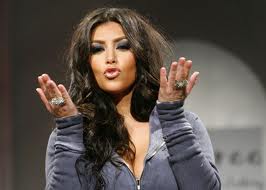 The breakup according to Life & Style occurred because Kim claims the 34-year-old Versace model was only interested in using her for money and to climb the Hollywood social ladder. “Kim feels like Gabriel was just using her for her fame” said a Kardashian insider.

The relationship comes just 7 months after Berry and Aubry called it quits on their five years together, Aubry has a two-year-old daughter, Nahla with Berry.

Another snoop said that Gabriel “is older than Kim is looking for, so she’s decided to stop seeing him.” Gabriel is four years older than Kim and he usually dates older women than himself.

We wouldn’t worry about Kim, she’s reportedly dating Kris Humphries, a 25-year-old b-baller for the New Jersey Nets and according to PopCrunch:

“Kim likes him much more than Gabriel. He’s normal, so much fun and cute. He’s perfect for what Kim wants right now, which is some fun dates and some fun times.”