.
You are here: Home / Music Happenings / Ke$ha At Band Camp, This Is Why She’s A Fake Industry Hack [Video] 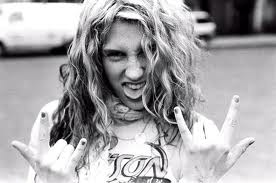 I have a deep rooted hatred for the completely industry manufactured Ke$ha or as I like to call her “Lady BlahBlah”  because she wants to be Lady Gaga but has no intelligent lyrics to match that want. Now a video which has surfaced from a 2001 high school band camp proves my point, she’s nothing but a made up industry wanker who changed her entire image to sell some albums.

Don’t get me wrong, some of her songs get stuck in my head, but really it’s like a bad hit of crack that I just can’t get over. Watch as she dances horribly and gets pretty much no attention…even from the geeky band boys.

At least we know her white trash living isn’t manufactured, she has that going for her I suppose.