.
You are here: Home / Celebrities / Kennan Cahill Gets Attention Of Katy Perry With YouTube Performance 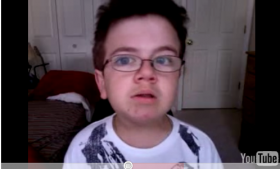 Keenan Cahill has a viral video hit on his hands. The Chicago youtuber put up a video of himself lip-syncing to Katy Perry’s hit “Teenage Dream” this week and it grabbed the attention of the singer herself.

“THIS… is my Teenage Dream,” later adding “I heart you @KeenanCahill.”

Keenan has 11,000 YouTube followers and now over a quarter of a million hits on this video alone.

For Katy Perry it’s just more publicity for her Teenage Dream album which sold around 200,000 units during it’s first week in release, it is the No. 1 album in the U.S. at this time.