.
You are here: Home / Career Moves / Keira Knightley is an Emotional Wreck 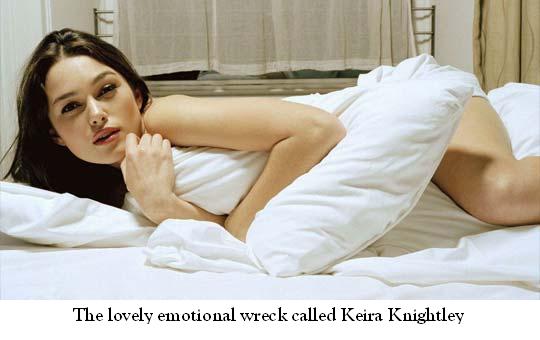 BesidesÂ being the skinniest thing to hit London since Kate Moss, KeiraÂ Knightley isÂ apparently an emotional wreck.Â  The Pirates of the Caribbean star has no idea why her boyfriend, co-star Rupert Friend,Â puts up with her & her out-of-control emotions, I have a few speculations on that subject…

Knightley tells Elle magazine, “I’m awful. I always have freak-outs. I don’t know why anyone puts up with me. I’m mostly an emotional wreck!”

She says even the smallest problems cause an emotional reaction: “It’s stupid s**t. I don’t freak out about anything that actually warrants a freak-out.

“That I can deal with. It’s the little stuff I can’t deal with.

“Anyone who has gone out with me will tell you I have this awful tendency to cry when I get really angry. And I can’t stop.

“If I could stop it I would, because I can occasionally come up with some fantastically cutting one-liners in fights.

Well, I guess I feel that this behavior is pretty much par for the course of an actor.Â  Any other ideas?