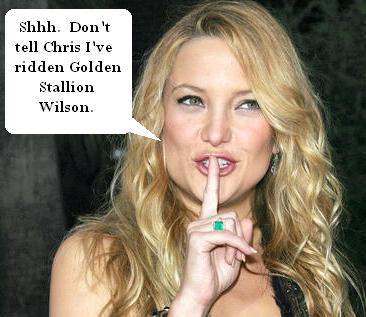 Wow.Â  Didn’t I totally predict thisÂ Tuesday morning?Â  Now theÂ rest of the world knows that Kate Hudson &Â You, Me and Dupree co-star Owen Wilson are reportedly an item & that Wilson may have contributed to Hudson’s & Chris Robinson’s separation.

On Monday Kate Hudson announced that she was separating from her Black Crowes husband Robinson after six years of holy matrimony.Â  According to god, I mean US Weekly magazine, Kate & Owen kept things under wraps during the filming of the romantic comedy You, Me and Dupree, but became romantic when doing press for the movie.

A source tells the magazine, “This is not (just) a fling. Kate is crazy about him. Owen gives her so much attention, and she loves it!”

The cute pair (poor Chris) have reportedly spent many a night at Wilson’s home in Santa Monica.

The source alsoÂ revealed that theyÂ “often shared hotel rooms” while promoting their movie around the globe.

Interestingly & refreshingly, a representative for Hudson did not deny the affair when contacted byÂ US Weekly, sating they hadÂ and “no comment.â€

Wilson’s lawyer, however, went with a different approach, “(Anything) that suggests that the separation of Ms. Hudson was caused by Mr. Wilson… is absolutely false.”

Well, all I can say is thatÂ I’m awesome & that I told you so.Â  I feel kinda bad for the poor Black Crowes rocker Chris Robinson, but come on- Kate Hudson & Owen Wilson would be the cutest possible couple.Â  It’s still too bad, another one bites the dust.