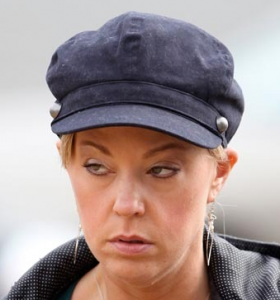 As if looking at Kate Gosselin wasn’t already hard enough to do, a recent statement came out from a plastic surgeon who said Kate had botox work done incorrectly, leaving her face looking emotionless (how could he tell, she always looks like that).

“She looked much better in earlier photos: great hair, nice smile and a normal brow position.” In the after photo, Kate “has the typical appearance of Dysport or Botox poorly placed in the space between the brows where frown lines occur.”

“The lateral part of her brow is elevated in an abnormally high position, which my patients refer to as McDonald’s arches.”

A second surgeon, Dr. Steven Pearlman agreed with that statement.  “The center of her eyebrows are dropped and spread, which can happen from Botox treatment of the forehead frown lines.”

Kate’s doctor was then criticized by a third doctor, Kenneth Beer criticized his work, stating:

“This is a bad injection technique with poor placement. The injections were done in a cookbook pattern with no consideration for her particular anatomy. Her outer brow is too peaked, which gives her a devilish appearance.”