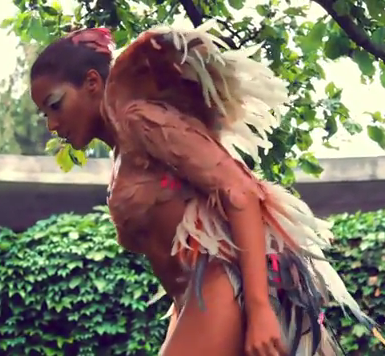 The music video is visually a departure from Wests’ other past video projects, providing listeners/viewers with a hip-hop epic that at points can drag on with chats and repeating beats I personally could have done without.

The version we’ve chosen to show gets rid of the swear words to make it safe for work.

The synopsis is that a phoenix (Selita Ebanks) plays a metaphor for West’s return to the top of his game. While West keeps using the video to talk about the hate he received from Taylor Swift fans after he dissed her at the 2009 MTV VMAs.

“The next day I wake up and people are saying, ‘die n-gga die,’ only cause you tried to make a change,” he said.

“I lost my tour, I lost my clothing line, my mother passed… Even this film was shot down, but we’re rockstars– f–ck your opinion. My swag is so one hundred million trillion.”

So what do you think? It’s no Michael Jackson video that’s for sure, but not a bad effort for an industry that has been lacking really cool music videos for a while now.