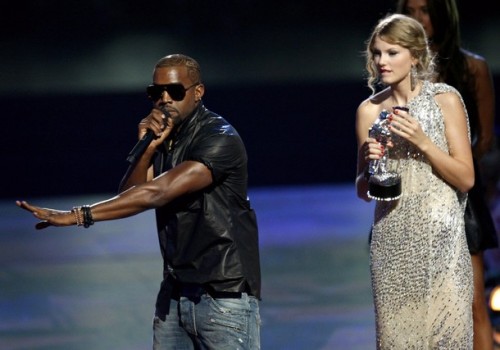 Kanye West has proven once again that he’s just as delusional as everyone already knows he is.

According to West, while he has tried to extend an olive branch to Taylor Swift various times since his 2009 MTV VMA stage storming appearance, she has chosen to ignore those attempts, while refusing to defend him to critics.

According to Kanye, regardless of the fact that Swift had sold millions of albums before the incident, while crossing over into Country and Pop fame, she has just been riding his coat tails from the incident to rise in fame.

“Taylor never came to my defense at any interview,” West told Manhattan’s Bowery Ballroom crown on Tuesday night, while adding “And (she) rode the waves and rode it and rode it.”

So let me get this straight, he ruined a big moment in her life and now she’s suppose to start defending him. Thank goodness for Kanye he’s an amazing producer, because it’s the only job his intellect would ever let him hold onto.

By the way, Taylor Swift did reach out, perhaps Kanye forget her “Innocent” performance at the VMA’s this year?