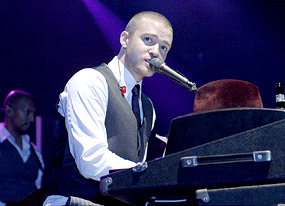 Justin Timberlake is taking FutureSex/LoveSounds album on the road and is launching a North American tour that will kick off January 8 in San Diego.

Who’s coming with, you ask?Â  Well, it looks like Justin is adding a little Pink to his diet!Â  I know you’re excited.Â  Justin Timberlake alongside Pink, should work out pretty good for them.Â  The 34-date tour will wrap up March 29 inÂ East Rutherford, New Jersey, so get a move on & start planning.

“I’ve been rehearsing the band, getting the show ready and tight,” Timberlake stated.

“Whatâ€”and I might even show up. So that’s pretty exciting. No, seriously, come out. I’ll see you guys there.”Â

And we’ll see you there, Justin.Â  So, who’s going?