.
You are here: Home / Who's Dating Who / Jim Carrey & Jenny McCarthy Tongue Action 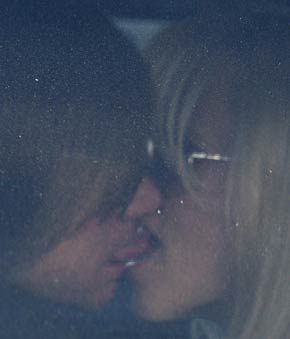 Last Friday 44-year-old actor & comedian Jim Carrey decided to surprise his girlfriend of eight months, Jenny McCarthy,Â with a sunset helicopter ride from Santa Monica Airport to Long Beach, CA.Â  And it looks like she liked the idea.Â

The couple have tried to keep their budding relationship a secret but with this new tongue-in-cheek photo, I doubt they can keep it up for much longer.Â

Friends of theÂ couple couldn’tÂ be happier.Â Â A pal, Bruce Vilanch stated,Â â€œIt should be a federal holiday every time a comedian scores a gorgeous girl.â€

And another source added, â€œJim is an amazing catch for Jenny.â€

I have to say that I was a little grossed out by Jim Carrey’s tongue in action.Â  Maybe that’s just me….