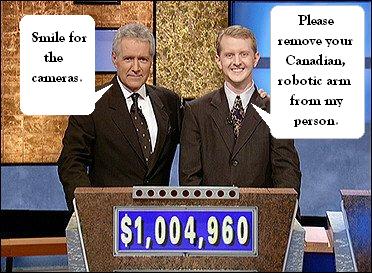 Despite having won $2.5 million on the Jeopardy!Â TV game show,Â software engineer Ken JenningsÂ has recently slammedÂ the long-running showÂ & its host on his website.

The Salt Lake City engineer was finally beaten in 2004 by challenger Nancy Zerg after one of the longest winning streaks on the show & was able to leave more than respectably with his cool $2.5 million.Â  And now after all that time, Jennings is doing a bit of Jeopardy! & Alex Trebek bashing.

He posts, “I know, I know, the old folks love him. Nobody knows he died in that fiery truck crash a few years back and was immediately replaced with Trebektron 4000, I see your engineers still can’t get the mustache right, by the way.”

After a brief spell, Jennings added a half-hearted apology stating, “We regret the insinuation that Mr. Alex Trebek is a robot, and has been since 2004.

“Mr. Trebek’s robotic frame does still contain some organic parts, many harvested from patriotic Canadian schoolchildren, so this technically makes him a ‘cyborg,’ not a ‘robot’.”

Ken has the ability to tickle one’s funnybone, but I wonder why he’s concentrating on this particular Canadian cyborg situation & not vacationing alongside a beauty in St. Tropez.

Alex Trebek is a robot, not a cyborg & I do miss the old stache.