.
You are here: Home / Career Moves / Jennifer Ansiton to Sign with Nike 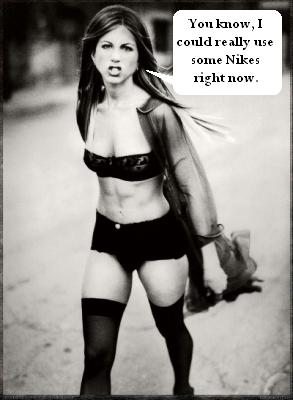 Jennifer Aniston is to join the ranks of Nike spokespersons.Â Â Aniston is reportedly inÂ talks with the sportsÂ giantÂ for a multi-million dollar deal that will include a coveted advertising spot during the Super Bowl in February.Â

The 37-year-old hottie will be donating the majority of herÂ fee to cancer charities.Â  Maybe I can submit a few more charities for Aniston to consider.Â  I’m thinking a Support Your Bloggers Charity has a nice ring to it…

Jennifer is a natural choice for Nike, given her avid jogging around her Malibu home which is regularly photographed for us & the tabloids.

Interestingly, Eminem announced earlier this week about his limited-edition trainers for Nike whose proceeds will be going toward charities in native Michigan.

You know, given the right opportunity (& cash) I could invent a whole new line for Nike, starting with underwater running & basket-weaving trainers.