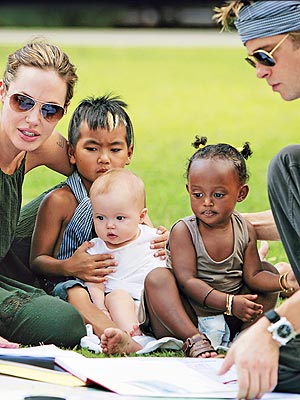 In a recent interview with toilet-side Reader’s Digest, Angelina Jolie revealed that her & Brad Pitt’s love child Shiloh was conceived before Pitt’s divorce from Jennifer Aniston.

Jolie states, “Before I met Brad, I always said I was happy never to have a child biologically.”

Then, a few months after Z (Zahara) came home … I realized how much he loved them, that a biological child would not in any way be a threat. So I said, ‘I want to try.'”

So, umm, how is Jen taking this news?Â  According to a pal, pretty well.Â  The insider reveals, â€œJen considered herself divorced when she and Brad were separated and couldnâ€™t care less what happened after that.”

â€œJen is not angry over the new revelation and thinks Shiloh is a cute baby.â€

But according to another “pal”, 38-year-old Aniston actually feels like the whole Brangelina thing is a joke, saying, â€œBrad and Angelina are totally a joke to her.”