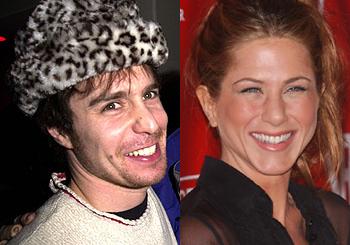 Rockwell, who I know you knowÂ & love fromÂ George Clooney’s Confessions of aÂ Dangerous Mind, costars with Jen’s ex-husband BradÂ Pitt in the upcoming filmÂ Â The Assassination of Jesse James by the Coward Robert Ford.Â  Aniston & Rockwell met-up at the popular Lower East Side restaurant Freemans, accompanied by two other men & another woman.Â  The gang enjoyed some drinks, as well as each other’s company for a little more than an hour.

“It seemed to me like a meet-and-greet, probably something movie-related.Â  Nobody really noticed it was her,” revealed a restaurant witness.

“Jen was friendly and nice and very pretty in person,” the insider added.

You know, that’s just too bad.Â  I could see some romantic magic between Jennifer & Sam develop.Â