.
You are here: Home / Music Happenings / Jay-Z Perfroms Seven Concerts in One Day! 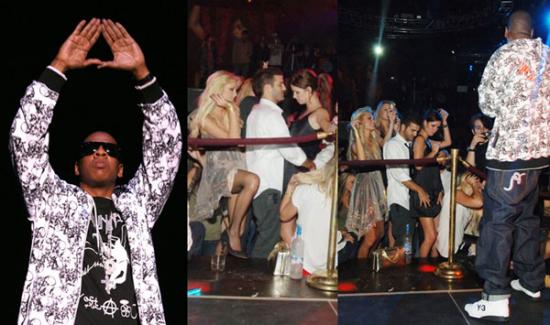 Jay-Z does more in 24 hours than I do in 24 days.Â  The 34-year-old rapper came out of semi-retirement to perform seven concerts in seven cities, all in one day.

The multi-citied concerts stretched from Atlanta, to Philadelphia, to Washington,Â to New York, to Chicago, to Los Angeles & finally to Las Vegas.Â  The 30-minute shows wereÂ Jay-Z’s attempt to promote hisÂ new albumÂ Kingdom Come, that hits stores Tuesday.Â  But to me, it was a great way to promote the benefits of having a private jet whisk you off to whatever city you like whenever you like.

Yes, you do see correctly, that is Paris Hilton out shaking her thingÂ with her latest boy toy David Katzenberg.Â  Apparently the hotel heiress took the stage with Jay-Z at some point, but couldn’t keep up due to drinking a barrel of Grey Goose.Â  Way to go, Paris.Â  I would like to see you try to pull off seven concerts.Â  No, wait!Â  That would be like the seventh level of hell, never mind that one.