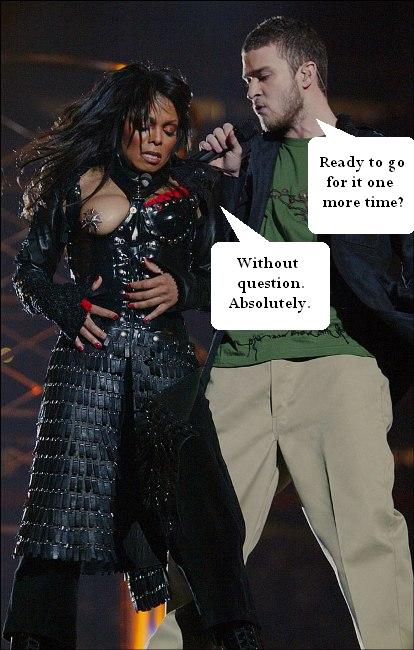 Insiders are whispering that Janet Jackson is in talks with Justin Timberlake to appear together once again in “some sort of big, live show like the Grammys or the Oscars” as the a publicity stunt.

The two stars have not spoken since the infamous breast-fest at Super Bowl 2004.Â  During that provocative appearance the duo rocked out to Timberlake’s songÂ “Rock Your Body” when a so-calledÂ “wardrobe malfunction” occurred exposing Jackson’s pierced right nipple on national TV.Â  The incident cost the broadcasting giant CBSÂ $550,000 in fines and plenty of ridicule.Â  I just thought it was funny, I would have paid to see comedy such as that.Â

A Jackson / Timberlake reunion “will help re-boost the sales of their albums” a source added.Â  Janet just came out withÂ “20 Y.O.” & Â Timberlake’s “FutureSex/LoveSounds” could use a little boost.

Sounds fun, count me in!