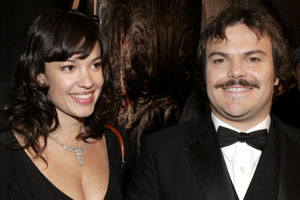 Well, it looks like Hollywood’s most hilarious bachelor is off the market, ladies.Â  Jack Black has eloped with his girlfriend Tanya Haden.Â  The couple first met while they were attending a private performing arts high school in Santa Monica, California, but were not romantically involved.Â  But now that Jack it making the big bucks, his cute little antics and rounded features are much more appealing.

According to the bride’s father, jazz bassist Charlie Haden, “They love each other very much.Â  We’re thrilled.”

Tanya Haden is one of a set of triplets.Â  Like her father, she is a musician and played cello in the Hayden Triplets (how cute) with her sisters Rachel & Peta.Â  Peta recently released the acclaimed a cappella album The Who Sell Out.

Black & Haden began dating when they bumped into each other last April at a mutual friend’s birthday party, where good old Tenacious D just happened to be performing.

After the initial re-meeting Black said, “Tanya was there.Â  I got really nervous and I talked to her… and it’s been great.Â  I’m really crazy about her.”

Black reportedly proposed to the cello-playing triplet right after Christmas, presenting her with a $220,000 ring from celebrity jeweler Neil Lane.Â  A celebrity a non-celebrity marriage.Â  I like it.Â  Maybe we won’t hear about â€œirreconcilable differencesâ€ too soon.