.
You are here: Home / Engagements & Weddings / Is Owen Wilson Shopping for an Engagement Ring for Kate Hudson? 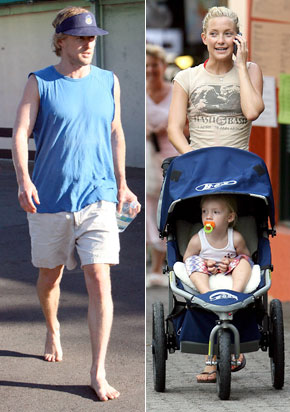 OK, OK.Â  It doesÂ seem highly unlikely, but accordingÂ to Us Weekly, Owen Wilson was doing a bit of ring shopping for his supposed lady love Kate Hudson on Friday.Â

38-year-oldÂ Golden Stallion WilsonÂ was spotted at the Highland Park MallÂ in Dallas Friday looking atÂ engagement rings with his mother.Â  The two stopped off at Harry Winston & admired the diamond wares for some time.Â

One witness stated, “They were looking at a huge, pear-shaped, flawless diamond engagement ring.”Â  Just how do these “witnesses” do it?Â  They know that Wilson & mom were looking at not only pear-shaped diamond engagement rings, but also that they were huge & flawless.Â  Sounds more like they were getting a look at my chest!Â  Ha! Â Where do they find these people?!

Anyhoo, Owen’s rep was quick (almost too quick?) to respond to these wedding ring allegations, stating, “Owen’s mother was looking for jewelry for herself.”

You know, it does seem a little more likely, as Wilson & Hudson are rarely able to spend time together.

What do you think- Too soon for a Golden Stallion & Kate wedding?