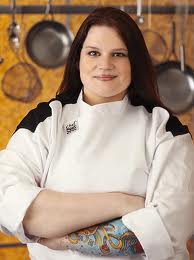 Nona Sivley has managed to survive all the barking orders Gordon Ramsay could throw at her to become the newest winner of Hell’s Kitchen.

Nona was facing off against Russell Kook in the 8th season finale and pulled ahead to win the shows $250,000 prize and a spot as spokeswoman for Rosemount Winery. Nona also receives the head chef position at L.A. Market.

“My door opened! It opened!” she screams when her door opened and Russell’s remained lock, the final humiliation for the loser and the determination for the shows season finale winner.

Russell had to rely on the help of Vinny, Rob, Jillian and Sabrina, during his final round preparations, all exiled chefs who he blamed for his loss:

“I’m pissed,” said Russell, “I’m not happy at all. I chose the team that I wanted and I thought they would help me win. In fact, they helped me lose. Thanks a lot, guys. You would never get a job in any city I work. I would definitely blackball you…because you guys f–ked me so royally tonight.”

Funny part for you Russell? You aren’t the one being offered the big job in the big city, Nona is.