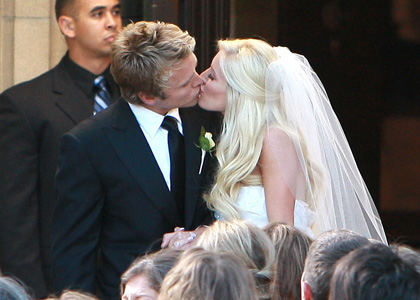 On the other hand, they also didn’t pay their taxes, owing $2 million in federal income taxes.

“We were immature, worrying too much about the famous part instead of the actual business part,” while adding, “In hindsight, we shouldn’t have spent any of our money. We should have been low-key and saved.”

“We thought ‘The Hills’ was going to be like [the original] ’90210? and we’d have another five to 10 years. The ratings were consistent. But we never saw ‘Jersey Shore’ coming. Before, TV audiences were fine with seeing us all argue, but now they want you to punch one another in the face and hook up with three different people. Our cast was a bit boring and snoozeworthy in comparison. No wonder we got cancelled.”

The couple are receiving food from their parents during a once a week shopping trip and Heidi is considering a full stripping session with Playboy.

That ladies and gentlemen is how two talentless twits fizzle out after a career in reality TV.