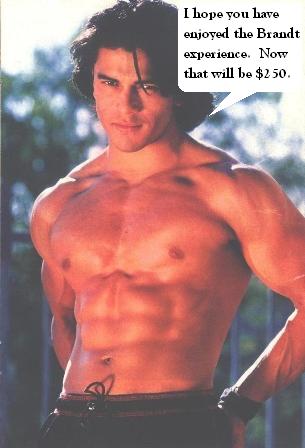 Hollywood madam Heidi Fleiss is gaining momentum in her plans to open her all-male stud farm in the Nevada desert.Â  A former soap star has signed on to become the face and body of the brothel, after gaining permission from his open-minded girlfriend.

Fleiss plans to open the house of men next yearÂ in the city ofÂ Pahrump, near Sin City Las Vegas.Â  That’s cute have a little rump in Pahrump, compliments of the Fleiss.Â  The madam already has her prize bull on hand, former Another World star Les Brandt has agreed to be her star pupil.

“I love to love women, I always have,” states Brandt.Â “I’ve loved women for free so far, so why not get paid to do something that I really enjoy and am good at.”Â  Well, he thinks pretty highly of himself.Â  And you can too, for $250 per hour.

Heidi picked Les Brandt to front her first male brother after “interviewing” over 3,000 “applicants”.Â  Brandt admits he had to get the OK from his current girlfriend before taking the plunge on this sexual adventure.

“We sat down and talked about it, and she said it wouldn’t be a problem as long as I took the proper precautions.Â  She knows it’s only a job.”

Only a job…Â  I see.Â  I can only say that my husband better not be getting any ideas, I’m not a good sharer.