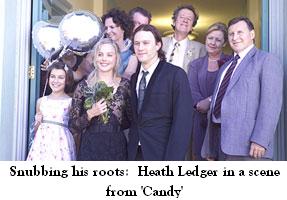 Apparently the real reason why Ledger did not want to attendÂ the Australian premierÂ goes back to an incident in January.Â  Heath was squirted, Tom Cruise-style,Â by water pistols carried by members of the paparazzi at his Brokeback MountainÂ premier.

Candy producer Margaret FinkÂ explainedÂ the actor’s nonattendance by saying, “I know Heath would want to be here, but he was put off by those jerks behaving so appallingly at the Brokeback Mountain premiere.

“Why would he want to come out here when people behave like that towards him? He was quite rightly infuriated.”

What a goof, that Heath Ledger.Â  I love a good confrontation.Â  Why snub the Candy premier when you can play with the paparazzi.Â  I’m no Tom Cruise lover but I did like the way he handled that whole War of the Worlds water gun thing in London:

One shining moment for the Cruise, I have to give him that one.