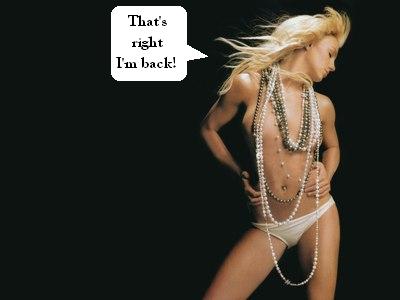 For theÂ Britney Spears has come to her damn senses!
Hallelujah!

According to British reports,Â Britney Spears has signed preliminary divorce papers.Â  Poor Kevin Federline is going to the poor house.

The pregnant pop diva allegedly signedÂ legal documents after consulting with lawyers about ending her marriage with K-Fed.Â  About damn time.Â  You know one kid, another on the way & an unsuccessful marriage under her belt by 24-years-old is a true feat.

A source told the British press, “It’s a stressful time. Britney has already started seeing lawyers about splitting with Kevin.

“She is serious about it. She knows she has to get things moving.”

We’ve all been suspecting this divorce for awhile, especially since the whole being-kicked-to-the-basement thing.Â  And with last week’s post on Britney Spears’ website, it was only a matter of time.Â

Spears posted a poem entitled ‘Remembrance Of Who I Am’ as well as a photo of her giving the bird on her website last week.Â  The poem describes Spears feeling tied down in “chains” & poses the question, to Federline supposedly, “How do you stand sleeping at night?”

The heart-felt poem continues with feeling of beingÂ “manipulated” and “swallowed” &Â mentions “the sins of the Father”.

Hopefully, it’s finally over.Â  We can forever put this K-Fed behind us & look forward to embracing the old & attractive Britney Spears.Â  I’m thinking she’s going to be hotter than ever with the breakup.Â  Just look what Nick Lachey & Beck’s albums did after their own heartbreak & disappointments.Â  Yep, I’m thinking the “I’m Back & Reinvented Tour” should be the title of Spears’ reappearance.