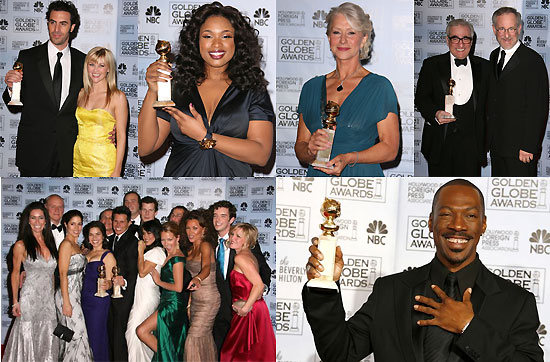 The Golden Globe Awards Show was aÂ sight to be seen, so I hopeÂ you tuned in last night.Â  Â The 64th Golden Globes were basically about balls.Â  Do you have them?Â  Are they big enough?Â  Are they tough enough to handle Angelina Jolie’s apparent attitude problem at the awards show?

Apparently Sacha Baron Cohen,Â whoÂ won the Golden Globe forÂ Best Performance by an Actor in a Motion Picture (musical or comedy) for his workÂ as Borat in Borat:Â Cultural Learnings of America for Make Benefit Glorious Nation of Kazakhstan, followed up Hanks’ balls speech with this little gem:Â

As the audience prepared to laugh uproariously, Cohen continued saying, â€œWhen I was in that scene, and I stared down and I saw your two wrinkled golden globes on my chin I thought to myself, ‘I better win a bloody award for this.'”

And not one to be outdone, Alec Baldwin, who won Best Actor in a TV Series (musical or comedy) for 30 Rock, accepted his Golden Globe saying, “I’m glad this isn’t too heavy because I just had hernia surgery December 21.Â  So, I just wanted to share that with all of you.” Â

Thanks, Alec.Â  Not only were we absolutely dying to know that you did in fact have hernia surgery, we wanted to know the damn date.Â

So, as you can see from all the balls, Monday evening was a night to share them to the world & the Hollywood Foreign Press Association.Â  Coming up, the full list of the 64thÂ Golden Globe winners below, provided that you all have a good set of balls.