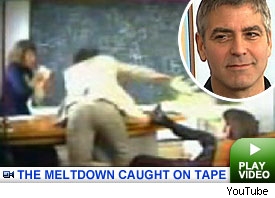 Wow, have you seen the now infamous profanity-ridden video of actress Lily Tomlin & directorÂ David O. Russell on the set of the I Heart Huckabees film?Â  It’s absolutely fabulous, check it out here.

Anyhoo, the rumors have been circulating, as one would imagine, how this particular vid could have been leaked to us, the public at large.Â  And guess who the finger is now pointing to?Â  George Clooney!

Sexypant Clooney has been spotlighted for leaking the Lily Tomlin video due to his history of pranks.Â  But the Cloonster is quite clear to say that he isn’t the one.Â  In a statement to various media outlets, Clooney pens,

“Contrary to popular opinion, neither the sound man, Ed Tise, nor yours truly sent in the David O. Russell tape. I saw it when we were working onÂ Ocean’s 12,Â and there have been quite a few copies traveling around town for the last couple of years. Any rumor that either of us put it on the Internet is simply false. And I’d offer a million bucks to anyone who would prove otherwise.

OK.Â  For a million bucks I can prove the Pope poops in the woods.Â  I can prove anything for that amount of money, George.Â  Well, I better get started on that fake confession…