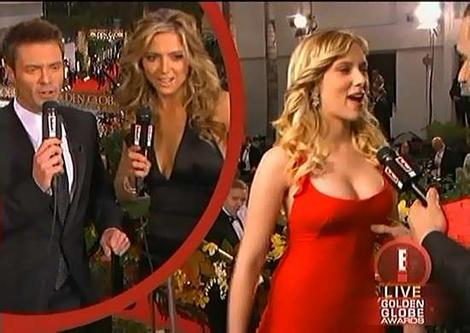 Six weeks after television cameras captured the scene, actress Scarlett Johansson says she was “sort of shocked” when designer Isaac Mizrahi’s groped her breast at the Golden Globes red carpet.

“It was definitely in poor taste,” said Johansson, speaking about her reaction publicly for the first time.

“I’d been prepping for two hours with hair and makeup and getting dressed. And the first interview I do, someone who I have never met before fondles me for his own satisfaction”- and ours as well, Scarlett.

Johansson was wearing a clingy, low-cut gown that made the most of her ample bust line when Mizrahi made his move.

“Mostly, I was thinking, ‘Oh, my god. This is happening on live TV.’ I don’t think he got a huge thrill out it. He was making some shocking show or whatever for his channel and wanted to be different and racy and all of those things,” she said.

“When it happened, I think I actually said, ‘What the heck is going on?’ At the same time, people made a huge deal out of something that, in the moment, was not as exciting as it seemed afterward.”

The starlet Scarlett isn’t buying Mizrahi’s explanation that he was just a designer trying to figure out how her dress was made.Â  “I’m sure he was very fascinated by that â€” like he doesn’t know how a dress works,” she said.

“I’m not mad at him,” she said. “I think he’s a guy that’s starting his TV career and he’s making a bit of an exciting moment for himself. I can’t be angry at him. Surely he is thrilled with the press and the attention it’s getting.”

“I get stalked by these people with giant cameras all the time when I’m doing my shopping or walking my dog,” she said. “I think it’s disgusting. Any picture you see in a magazine that is a candid is a complete and total invasion of my privacy. I think it has to do with this whole obsession with tabloid news.”

Johansson said she leads “a very private life” and tries to maintain a low profile.

“People will tell you that you gave up your private life when you decide to become an actor,” she said. “I’m not out there to publicize my private life. I try to avoid any situation where I might be harassed or followed.”

That doesn’t mean she will avoid Mizrahi in the future â€” though the question will be moot Sunday: She isn’t going to the Oscars. Nor did she alert her managers to screen future contact with him or other interviewers.