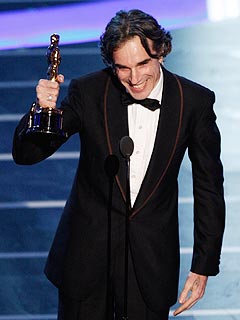 Daniel Day Lewis took home the Best Actor trophy for There Will Be Blood. This is the second Oscar for the English actor (the first was for My Left Foot.

While accepting his award from last’s year’s Best Actress winner Helen Mirren, Day-Lewis said, “That’s the closest I’ll ever come to getting a knighthood.”

Best Actress Marion Cotillard won Best Actress for her portrayal of singer Edith Piaf La Vie en Rose. “We’ll, I’m speechless now,” she said. “Thank you, life. Thank you, love. It is true, there are some angels in this city [Los Angeles].” A fantastic feat for someone who couldn’t even speak English before, as she revealed in a charming interview with the New York Times.