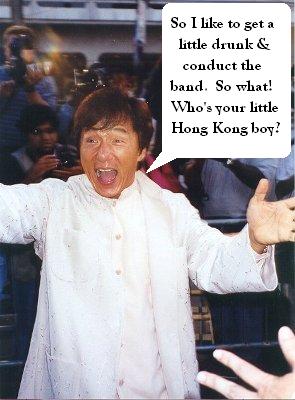 In a wish-I-could-have-been-there event, Jackie Chan rushed the stage of a Hong Kong concert while intoxicated.

Action star ChanÂ was invited to attend the performance of Taiwanese singer Jonathan LeeÂ this past Sunday in his native Hong KongÂ & apparentlyÂ thankedÂ everyoneÂ for the invite by crashing the show.

According to the Ming Pao Daily News, Jackie Chan unexpectedly took the stage & disrupted Lee’s performance while shouting insults at the crowd.Â  The newspaper claims Chan told the audience that he was drunk & wished to sing a duet with Lee.Â

Chan also attempted to conduct the band, but was only able to start & stop them several times.Â

Hilarious, I say!Â  I wonder if the real, drunk Jackie Chan is similar to the drunk Chan in Shanghai Noon, ’cause that would actually be quite adorable.Â  Yep, definitely a wish-I-could-have-been-there event.