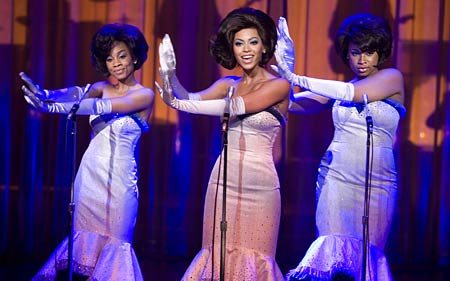 Well, itâ€™s no big surprise really.Â Â Dreamgirls is leading the Oscar nominations that were released Tuesday.Â  TheÂ film, which stars Beyonce Knowles & newcomer JenniferÂ Hudson,Â has snatched up eight Oscar noms.Â  The oneÂ nomÂ the movie did not receive, however, was the much highly toutedÂ BestÂ Picture Academy Award or even a Best Director nom.Â  Who else is surprised about that one?Brad Pitt’s Babel follows the Oscar pack with seven nominations, including Best Picture.Â  BabelÂ will joinÂ The Departed, Letters from Iwo Jima, Little Miss SunshineÂ & The Queen for the title of Best Picture.Â  Which I’m rather happy with, if you had Dreamgirls in the mix, that would have been an even tougher decision, right?

The 79th Annual Academy Awards will take place February 25 in Hollywood, of course.Â  You know you wanna see the complete list of Oscar nominations below.

Borat: Cultural Learnings of America for Make Benefit Glorious Nation of Kazakhstan
Children of Men
The Departed
Little Children
Notes on a Scandal