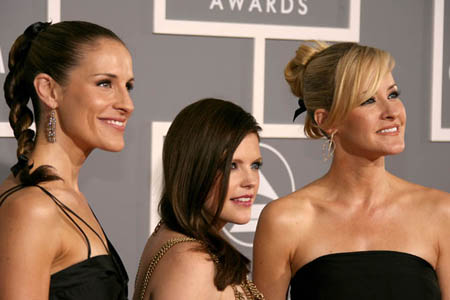 The beloved &Â hated alike Dixie Chicks took home five Grammy awards Sunday.Â  The music group is said to now be breaking up after the awards show so that theÂ chicks can spend more time at home with their families & baby chicks.Â Â Â

“”The Dixie Chicks won all five awards they were nominated for, sweet vindication after the superstarsâ€™ lives were threatened and sales plummeted when Maines criticized President Bush on the eve of the Iraq war in 2003. Almost overnight, one of the most successful groups of any genre was boycotted by Nashville and disappeared from country radio.

With â€œTaking the Long Way,â€ the women relied on producer Rick Rubinâ€™s guidance for an album that was more rock and less country. (Rubin, who also produced â€œStadium Arcadium,â€ was honored as producer of the year.)

The standing ovations the Chicks received Sunday illustrated how much the political climate has changed regarding the Iraq war, and even Bush.

â€œThatâ€™s interesting,â€ Maines crowed from the podium after the country award was handed out earlier in the night. â€œWell, to quote the great â€˜Simpsonsâ€™ â€” â€˜Heh-Heh.â€™

Bandmate Emily Robison noted, â€œWe wouldnâ€™t have done this album without everything we went through, so we have no regrets.â€”

That was a silly bit, quoting the Simpsons like that, Maines.Â  So, I wonder with five Grammys, will the Dixie Chicks really go through with the breakup?

Thanks to GossipRocks for the image.