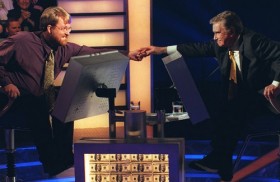 Celador, the production company behind the smash hit Who Wants To Be A Millionaire, was award $269.2 million in damages on Wednesday in a Los Angeles court.

Who Wants To Be A Millionaire was a huge hit for ABC (Disney owned) from 1999-2000 however Disney claimed the show was operating in the red and they used doctored documents to prove their point.

Since the show debuted various lawsuits have come forth claiming the studio lied about the shows profits and deception was blamed on almost all of those incidents.

Disney plans to appeal, but if the documents have been shown to be fake, I wouldn’t expect a different outcome or much less of a payout settlement from a multi-billion dollar corporation.