.
You are here: Home / Naughty & Nude / Dina Lohan Likes to Do It in Restaurants 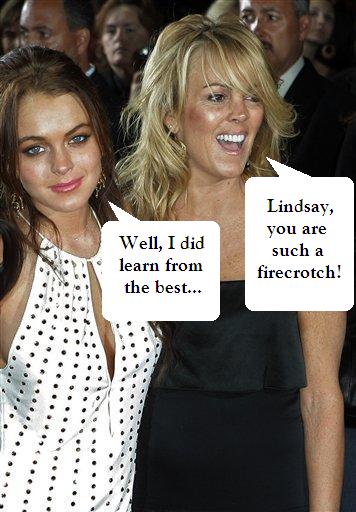 Dina was spotted at NYC’s Kobe Club wearing a “really short dress and boots” which fellow diners didn’t mind too much, but what the diners did mind was Dina spreading them wide underneath her table & letting her date go to town.Â  Come on, who isn’t for a bit of public, I mean public, affection?

According to a Page Six source, a gentleman (we use that term loosely) sitting next to Lohan was “all over her”.Â

“Dina had a napkin in her lap and hiked up her dress,” the source reveals.

“The guy put his hand under her napkin . . . It went on for like five minutes.”

Gag & vomit.Â  Apparently after the gentleman realized that he was being watched, he stopped the action altogether.

A repÂ for Dina stated, “That’s a disgusting lie and it’s completely untrue.”

But it’s still hilarious nonetheless.Â  I’m crossing my fingers for pictures, aren’t you?

So, you tell me- Who’s the biggest firecrotch, Dina Lohan or daughter Lindsay?