.
You are here: Home / Engagements & Weddings / Did Tom Cruise Wear a Girdle to Katie Holmes Wedding? 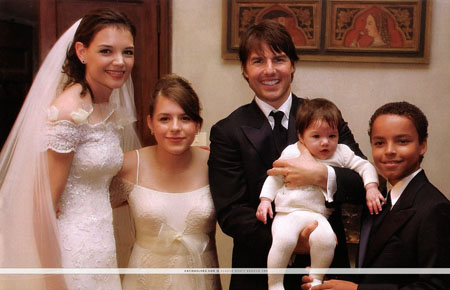 According to gossip guru Janet Charlton, Tom Cruise needed a little help into his wedding tuxedo.Â  Wow, what did wife Katie Holmes think about that one?Â Â I’m not sure that IÂ swallow this particular story, but it’s pretty hilarious all the same.Â  Maybe Tom has gained a littleÂ in the tummy lately…Â Â

Hereâ€™s a juicy little secret that Tom Cruise might kill us for telling you. Oh well, here we go- Tom was wearing a GIRDLE under his tuxedo at his wedding! In case you havenâ€™t noticed, Tom packed on around twenty pounds in the past few months before the big event. He says heâ€™s a â€œnervous eater.â€ And heâ€™s had a lot to be nervous about – his exit from Paramount and his high octane marriage. When Tom arrived in Rome, we hear that Giorgio Armani was apoplectic because the wedding tux was too small. Armani personally tended to all the fittings while Tomâ€™s pants were let out and various details were adjusted. Tom wanted to look svelte so he didnâ€™t protest when Giorgio suggested girdling Tomâ€™s midsection so the jacket would fall properly. The corset was sewn into Tomâ€™s undergarment. Everyone was sworn to secrecy, but those Armani employees love to gossip, and are we grateful for THAT!

Swap the wearing a girde to the Italian wedding story for Tom Cruise wearing shoe lifts toÂ almost meet the height of Katie Holmes, then I would believe you.Â

Tom & Katie are still honeymooning in the Maldives & probably laughing at that whole girdle story….