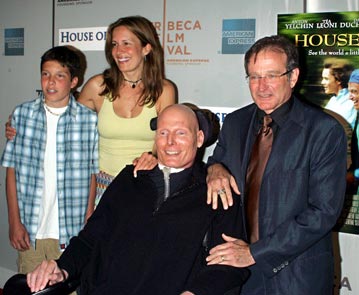 Oscar-winner and funnyman Robin Williams is making good on a promise.Â  Williams insists he will care for the orphaned son of Christopher & Dana Reeve, after the teenager’s mother died of lung cancer last week.

Williams & Superman Christopher Reeve, who died October 2004)Â were always close, after having studied together at the Julliard school of drama in New York City.Â  After Reeve suffered from the riding accident in 1995 which left him paralyzed from the neck down, theÂ One Hour Photo star was quick to assureÂ the family that he wouldÂ neverÂ desert them, or make dessert out of them.Â  He is standing by his vow and is up for caring for 13-year-old Will.Â

A relative of Dana Reeve said, “He has already been making good onÂ a promise he made to Chris in 1995.Â  They were closer than brothers and Robin swore then and there that he would look after Dana and Will after Chris was gone.Â  Both of them knew Chris might not last long but neither of them could possibly have imagined the tragedy that would befall Dana so soon after Chris’ own death.”

Dana Reeve died March 6th of lung cancer despite being a non-smoker, she was diagnosed in August of last year.Â  She was respected and admired world-wide for her dedicated research on stem cells & paralysis as well as supporting and standing beside her husband after his riding accident that occurred after only three years of marriage.

In his autobiography, Still Me, Christopher Reeve wrote that he suggested early on to his wife, â€œMaybe we should let me go.â€ She responded, â€œIâ€™ll be with you for the long haul, no matter what. Youâ€™re still you and I love you.â€

Those were â€œthe words that saved my life,â€ Christopher Reeve said.

That is really beautiful, I have to say.Â