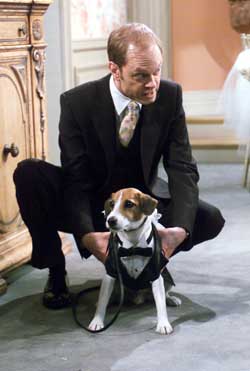 Longtime “Frasier”Â star & Tony-nominated actor David Hyde Pierce is finally & officially out of the closet.Â  No big surprise there, was it?

But the news wasn’t so much voluntary.Â  AfterElton.com recently published a story about Pierce where they alluded to his “partner” Brian Hargrove.Â  So, alarm bells went off that the 48-year-old actor might be coming out of the closet.

Once the website called to confirm with Pierce’s rep if the pairing was accurate, the news was confirmed.

I don’t think we really needed a big blow-out story for news that David Hyde PierceÂ is gay.Â  Just ask anyone who watched “Frasier”.