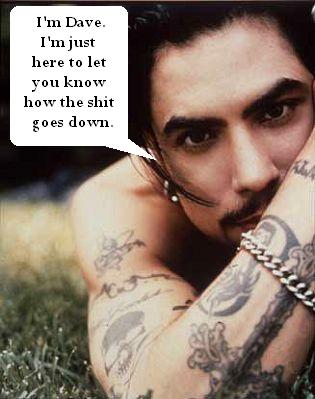 Rocker & Carmen Electra ex Dave Navarro has a lot of time on his hands lately & has been a busy, busy bee.Â  Recently on his blog, Navarro has let loose some steam on Life & Style magazine.Â  Here is the man now.

“Life & Style are now officially the new Kings of the Bottom feeders…L&S has stated that I am homeless and heartbroken after being kicked out of someone’s home (whom I never dated or lived with).

“As you know, I don’t like to respond to this stuff, but my real issue with them isn’t the story or my denial, it’s the fact that they called for a comment and chose not to run it because it made the story less dramatic and sensational. What did they think I was going to do? Confirm? When they asked for my response, I informed them that not only have I never dated the woman in question, but I have never even been to her home, let alone lived there.

“I am also very much housed, living in a comfortable residence situated in the heart of fabulous Hollywood, CA. In true L&S form, they chose to go with the “source”, instead of the facts that came directly from the center of their story… Me.

“Is it worth my attention? No, not at all… But it sure is fun! HAHA! Plus, I like to give you, the reader, an inside look at how this shit goes down. (It also doesn’t suck that I get to trash L&S in the process!)”

Ahhh, Dave and your many, many, may women.Â  How does heÂ keep up withÂ all of them?