.
You are here: Home / Mischief & Mayhem / Dave Navarro, Carmen & All His Many Women 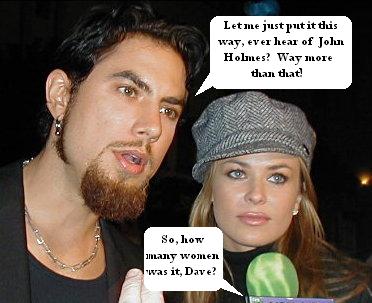 While Dave Navarro is getting cozy with JennaÂ Jameson, the actress who had a fling with NavarroÂ in Las Vegas while heÂ was still married to Carmen Electra,Â  is hoping to meetÂ fellow actress Electra on the set of the new movie Beyond Legend: Johnny Kakota.

Jenae AltÂ claims that she stunned the rocker when she revealed that she was slated to appear inÂ his then-wife’s next movie about a Native American legend.Â  Apparently the only reason Alt did not sleep with the promiscious Navarro was that she respected Carmen too much.Â  But now, after selling her kiss-and-tell revelations to the tabloids, Alt hopes to explain herself to Electra.

Alt states, “Would I have slept with him if he wasn’t married? Yes. But the only reason I stopped myself from sleeping with him was I didn’t want to be the woman who slept with Carmen’s husband.

“I really respect Carmen, I love Carmen and I just said, ‘You know what, if any man is gonna cheat on Carmen Electra, why would I even want to be with that man, because I would always be looking over my shoulder.’

“If I get the chance to work with Carmen, I’ll tell her, ‘The only reason I didn’t (sleep with Navarro) is because I respect you. I still thought about you and said I can’t do it.'”

I’m wondering how Carmen will handle this situation.Â  I’m thinking a good, stiff kick in the ass sending her offset.