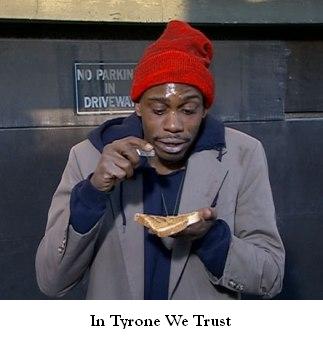 Dave Chappelle is still struggling to explain to his wife Elaine why he left behind a $50 millon contract from Comedy Central.Â  While onÂ Late Night With Conan O’Brien last night, the comedian joked about how he’s still licking the salt off his wounds.Â  Â

“My wife is still a little salty with me.Â  She’s not mad at me, but don’t think you can walk away from $50 million and your wife is just going to be cool with it.”

Dave Chappelle has repeatedly defended his sudden retreat from his lucrative & popular Chappelle’s Show over the past few months, laughing over the claims that he is “crazy” and seekingÂ psychological help.

Chappelle & O’Brien joked about his swift exodus to Africa where he went immediately following his departure from Comedy Central’s Chappelle’s Show.

“When you go to Africa, especially your first time, you have this overwhelming feeling like you’re home,” he said. “I had a feeling of `man, this feels like home.’

“I think I felt that way because there was a McDonald’s in the airport.”