.
You are here: Home / Breakups & Goodbyes / ‘Dancing with the Stars’ Sara Evans Talks About Divorce 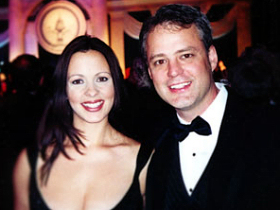 As posted earlier, Dancing with the Stars ex-contestantÂ & country singer Sara Evans recently announced that she was filing for divorce from her husband of 13 years, Craig Schelske.Â  After making the statement that she was leaving the dancing show, Evans turned her attention to her family.

“It’s a blur,” Evans stated regarding the recent events.

“The good thing is that I’m so used to performing, as you know, that as an entertainer, we just have the ability to just try to flip the switch, turn it on, do the dance and make it through the day.”

Evans had considered divorce earlier this year and even begun filing paperwork, but she was trying to take it slow, thinking about her children.

Sara revealed, “It was always my intention to try to take things slowly.Â  My intention was to try everything that was in my power [to save the marriage].”

“It’s very personal and very traumatic and very hard for my children.Â  Things drastically went downhill at 100 miles an hour.”

We wish both parties luck & more love in the future.