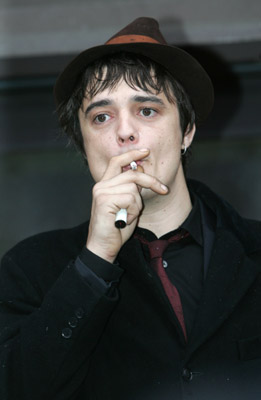 There are so many of these damn drug possession charges under Pete’s nasty belt that it’s hard to keep up, but this one is basically a review of his efforts in staying off drugs & trying to lead an every day, Englishman’s life.

After the review, District Judge Jane McIvor revealed that she is at least â€œoptimisticâ€ over Pete’s progress.

â€œThis is more optimistic but we cannot take the pressure off. It takes day-to-day effort,” McIvor was quoted as saying.

Pete says that he’s enjoying being more coherent, saying, â€œItâ€™s like she said, really itâ€™s just time. For the first time I am actually turning up for appointments in a coherent state. For them, itâ€™s a big step. Itâ€™s just a really positive time for me at the moment.”

Wow.Â  Well, good for Pete.Â  We look forward to the next time he gets busted with crack possession.

You tell me- Is Pete Doherty off the sauce forever?