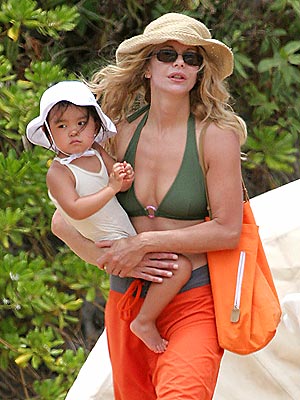 Wow, I haven’t seen a picture of Meg Ryan in like ages.Â Â The lady isn’t looking too terrible, now is she?

Ryan &Â herÂ 2-year-old adopted daughter Daisy were spotted on the beaches of Hawaii recently.Â  And don’t they lookÂ adorable?!

Meg gave an interview to Redbook magazine not too long ago where the actress was quoted as saying that she isÂ “completely convinced that there was nothing random about [the adoption.] She is the daughter I should have.”

Sounds likea good attitude to have, though a little on the hippy side of things.