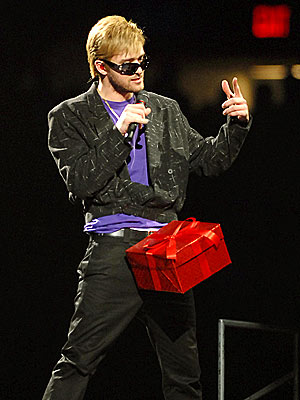 Well, now that we already have the scoop onÂ “Dick in a Box” we can now bask in pictures of Justin Timberlake performing the song.

On Wednesday Timberlake took the stage at Madison Square Gardens to reprise the song “Dick in a Box” from that SNL skit mentioned earlier.Â  Special guest Andy Samberg joined Justin on stage for the duet & the audience loved it.

TimberlakeÂ spoke to the crowd just prior to singing the hilarious song, saying,Â “I’m sorry if I offended some of you, but I could not resist.”

Well, maybe I’ll give liking Justin Timberlake another chance, he’ll just always be that boy band guy to me.

You tell me- Do you think J T is better than sliced bread?