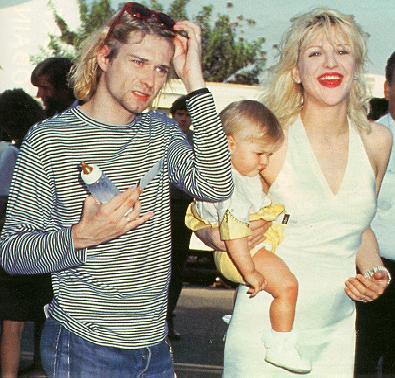 Crazypants Courtney Love is finally going to auction off some of her late hubby’s personal effects.

42-year-old Love is holding at auction at Christie’s to sell off some of Kurt Cobain’s clothing, a guitar & some lyrics.Â  Love stated that living with them in her home “is like a mausoleum”.

Love reveals that much of the proceeds from the auction will go to charity, but thinks this is a good choice for her 15-year-old daughter Francis Bean.

“My daughter doesn’t need to inherit a giant … bag full of flannel … shirts. A sweater, a guitar and the lyrics to `(Smells Like) Teen Spirit’ â€” that’s what my daughter gets.”

Love goes onÂ to reveal that she’sÂ still just as crazy as ever, saying,Â “I still wear (Kurt’s) pajamas to bed. How am I ever going to go form another relationship in my lifetime wearing Kurt’s pajamas?”

Well, you seemed to form a pretty good relationship with drugs there, Court.