.
You are here: Home / Celebrific Sighting Pictures / Courtney Love is Melting Away 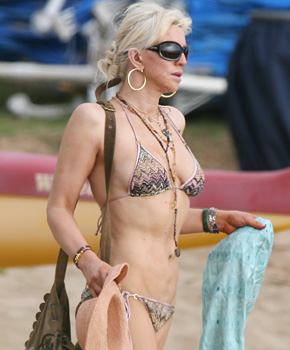 I wonder what KurtÂ would think…..

Former Hole frontwoman Courtney Love was spotted at Maui’s Kea Lani Resort earlier this week showing off a very noticeable new figure.Â  Looks like Love could even compete in the boxing ring from the looks of it.Â

42-year-old Love has apparently lost 45 pounds since December.Â  Wonder if this has anything to do with that nude photo shoot?

Anyhoo, the singer has been melting away by drinking the famed Isopure diet shakes for the past four months.Â  Love is also combining more fish, steamed veggies, waving off the carbs & doing loads of yoga.

“She’s feeling like a different person,” reveals an insider.

Apparently Courtney is planning on losing 55 pounds altogether.Â  Yeah, I guess these folks aren’t happy until they work off their breasts as well.

You tell me, Do you like Courtney’s new look or is it a little on the too skinny side of things?