.
You are here: Home / Naughty & Nude / Colin Farrell is Mickey Mouse in Bed 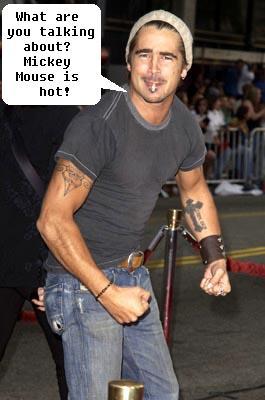 Colin Farrell has been painted as Mickey Mouse in bed by French beauty Angelique Jerome for being a disappointment & not living up to his on-screen tiger image.

The French siren & the Miami Vice star hooked up just hoursÂ before his London premier of the cop drama.Â Â 24-year-old Jermoe was delighted at being singled out by theÂ Irish actor, but said his lovemaking was overrated and cartoonesqe.

She says, “He must have told me I was beautiful eight times. I like bad boys. But he was too nice. He kept telling me how beautiful I was and I thought, ‘just shut up.’

“He comes across as a tiger on screen, but behind closed doors he’s as wild as Mickey Mouse.

“Maybe he has lots of women because he’s not that good in bed. Maybe they don’t want to stay.”

Wow.Â  Mickey Mouse.Â  I bet that one hurt.Â  But still the life of a movie star…Â  Picking outÂ the loveliest lady in the room & saying, “You, me.Â  Now.”Â  What a strange & beautiful world.