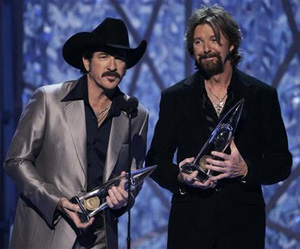 Well, it was a night filled with spectacle & entertainment as the 40th Annual Country Music Association AwardsÂ hit the stageÂ Monday.Â Â Kenny Chesney won the coveted entertainer of the year while Brooks & Dunn’sÂ hit song Believe won three awards includingÂ Single of the Year &Â Song of the Year.

“There have been so many ups and downs, it’s been like a huge emotional roller coaster ride,” Kenny went on to say.

One of the most moving events of the evening was when the Top Male Vocalist award was announced, and Keith Urban won the prestigious award.Â  Urban, who is currently in an alcohol rehabilitation center, received a standing ovation while his award was accepted by Ronnie Dunn.

Dunn read a letter to the crowdÂ penned by Urban thanking his wife Nicole Kidman, “To my wife, Nicole, I love you.”

“I’m looking forward to coming home and seeing you all soon.”

Wow, you gotta loveÂ how the country starts do it up.Â  Congrats to all the winners!