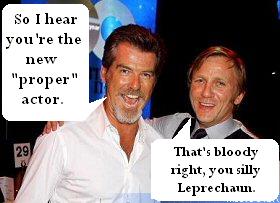 Daniel Craig has taken over the Bond reigns fromÂ Irishman Pierce Brosnan who had the infamous role for three of the Bond series movies.

Owen was another actor slated to play the part of the suave spy, but is overjoyed for Craig & insists that he is thrilled that a “proper actor” has been cast as 007.Â  A slight on Brosnan?

Owen states, “I think when Craig first took the part he got a pretty rough ride, which to a certain extent is inevitable because there are so many different people who have so many different ideas about something like that. You are never going to please everybody.

“The thing that is really exciting is that he is a proper actor. He is not shallow or posing. They have cast a really serious actor and I think that when the film comes out everyone will see what a great choice he was.”

Wow.Â  Seems like the English still have a grudge for the Irish.