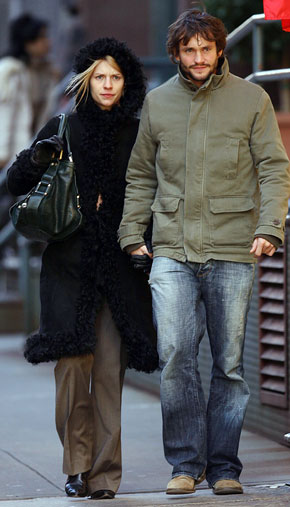 27-year-old ClaireÂ Danes (I thoughtÂ she would be way older than that) has dumped her man of three years, 38-year-old Billy Cudrup, Â and taken up with a new man.Â  Danes & 31-year-old Hugh Dancy (who kinda looks like a young Billy actually) were spotted in New York’s SoHo district Thursday holding hands.

The new duo spent the day having a cozy breakfast, walking around the city & grabbing a bite to eat for lunch as they grabbed a bite of each other.Â

Maybe Claire has finally found a decent human being to date, since Cudrup certainly didn’t fit that bill when he left his 7-month-pregnant girlfriend Mary-Louise Parker in 2003 to be with Danes.Â  Oucharoo, why do those men keep playing that card?Â  First K-Fed, then Eddie Murphy & even sweet-faced Billy-C played that card.Â  What gets in that Hollywood water?

What do you think- Do Claire Danes & Hugh Dancy make a nice couple?