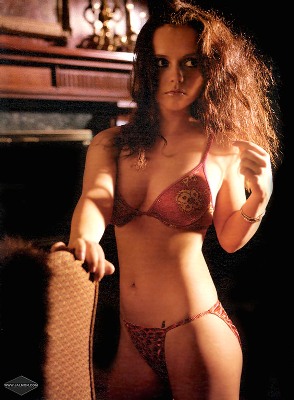 Christina Ricci wanted the lead role in Craig Brewer’s film Black Snake Moan, so strongly that she sent Brewer explicit photos of herself.

The film centers around a promiscuous sexual abuse victim & Ricci was hard pressed to let the director know that she could handle the pressure.Â  Christina faught hard for the abuse victim role & apparently did OK in her audition, but the filmmakers were unsure if the Monster beauty could play such a raw role.Â

So, when all else fails, send naked pictures of yourself- of course!Â  You know, I would like to do that.Â  “Listen, Sir.Â  I’m not sure if you can handle the explicit nature of this film, so I’m going to have to ask you to get naked, bed over & let me spank you.”

The 26-year-old star spent the majority of the film chained to a radiator & said she remained half-clad between takes to try and better understand her character Rae’s shame.

Ricci also lets us know her feeling for Spears & Simpson.Â  She stated that she used Britney Spears & Jessica Simpson as her role models while playing the sexually inclined character.Â  Well, I guess that makes sense.

She adds, “She has Britney Spearsâ€™ hair and Jessica Simpson’s inappropriate wardrobe.

“This is just a microcosmic example of the over-sexualization of young girls and children. Even though she’s not really a child, she looks like one.”

Score one for Ricci.