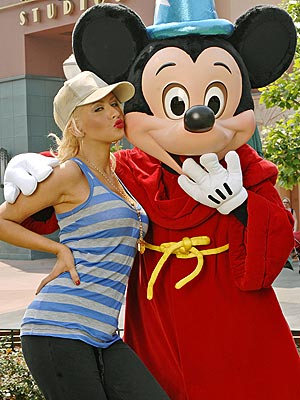 Reunited, and it feels so good!Â  A lot of reunited couples on the docket today.Â  Christina Aguilera was spotted on Wednesday getting all puckered up for her old pal Mickey Mouse.

The unlikely pair were taking time for smooches & photographs at the Disney-MGM Studios in Lake Buena Vista, Florida.Â  Xtina originally appeared on “Star Search” back in 1990, but her career really took off while she joined the cast of “The New Mickey Mouse Club” show three years later.

Ahh, whatÂ a torrid past these two have!